The line-up for the first edition of Download Germany is complete: rounding out the programme alongside British punk rock sensation Frank Carter & The Rattlesnakes and post-hardcore high-flyers Holding Absence are cross-over phenomena Poorstacy and Ghostkid. The four new additions join previously confirmed acts Five Finger Death Punch, Sabaton, Hollywood Undead and Behemoth, as well as the headliner Metallica, ensuring the festival programme at the Hockenheimring will be as intense as it is varied.

An audience of over 70,000 is expected at Download Germany on 24 June 2022. In addition to the standard tickets for the track interior and south stand, which are still available, VIP tickets are now also on sale. Along with premium seats, these also feature other benefits, including access to a VIP lounge with numerous perks and goodies.

All tickets are available as mobile tickets or alternatively for printing out as TicketFast. 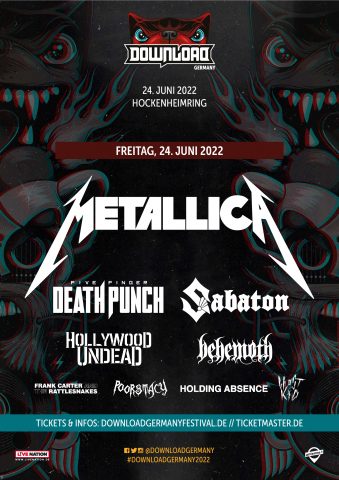