The return to Germany for the season opener, six of the most prestigious tracks in Europe, Finals and season-end gala on the Croatian riviera, two special events including the first ever NASCAR competition on ice: the NASCAR Whelen Euro Series fans are up for a special treat in 2022. The official NASCAR European series unveiled today a 2022 season calendar that can easily be described as the most exciting in the series history to celebrate Whelen Engineering’s 10th title sponsorship season.

Continuing with a widely popular format, six American-themed events and 24 NASCAR sprint races will be featured in the NASCAR Whelen Euro Series season. The four races of the last event will award double points. In addition, two special events – All-Star and Winter Classic – will bring EuroNASCAR to an even broader audience.

“It is so good to come back to full speed in 2022 with this incredible 8-event calendar!” enthused President-CEO Jerome Galpin. “With some of the most iconic circuits and a new revolutionary NASCAR on ice event, the stage is set for an amazing EuroNASCAR season! Our great circuit partners are already at work to welcome fans back at the track and offer them the best racing show in Europe in great American festivals. After two challenging years, it is truly a pleasure to gather again to share our passion for pure racing.”

“Whelen Engineering is very excited for our 10th Season with the NASCAR Whelen Euro Series.”, said Peter Tiezzi III, General Manager of Motorsports for Whelen Engineering Company, Inc. “We are looking forward to another great season, at some amazing tracks throughout Europe.”

Whelen Engineering is known throughout the world for its powerful, reliable warning lights and scene illumination solutions, sirens, and control systems for first responders and emergency services as well as aviation and mass notification industries, all of which are manufactured in America.

The April 9-10 season opener will see the long awaited return of the European NASCAR Series to the iconic Hockenheimring for the delight of the German NASCAR fans. Hockenheim will kick off the NWES season for the first time ever with the third edition of the American Fan Fest.

The NASCAR Whelen Euro Series will then head to Spain one month later on May 14-15. The Valencia NASCAR Fest will host four exciting NASCAR sprint races at the Circuit Ricardo Tormo, the track that hosted the most NASCAR races in Europe. On June 10-11, the historic Brands Hatch Indy Circuit will welcome the ninth edition of the American SpeedFest, the longest standing event in the NWES calendar and a can’t-miss festivity for the British fans.

During the summer, a brand new All-Star event will take place in Italy granting the fans the best opportunity to enjoy EuroNASCAR and the Italian sun. Date, venue and formula of the event will be unveiled at a later date.

The battle for the 2022 European NASCAR title will resume in the Czech Republic on September 3-4 at Autodrom Most. After a spectacular return in 2021, the Autodrom Most NASCAR Show will once again play a key role in the season and offer a unique show to the fans. The iconic Circuit Zolder will then close the Regular Season with the American Festival NASCAR.

The glamorous Croatian Kvarner riviera will host the EuroNASCAR Finals on October 29-30 with an exceptional event. Four double-points races at a fully renovated Automotodrom Grobnik will decide who will wear the European NASCAR crown.

After being crowned at the track, the 2022 EuroNASCAR champions and trophy winners will be rewarded for their success in a unique gala hosted by Liburnia Hotels & Villas at the Kvarner Riviera Hotel on October 30.

The fun will not be over though. Fans and competitors will have one more fantastic event to look forward to during the winter as the NASCAR Whelen Euro Series will bring the NASCAR show to the ice! After breaking ground by testing a NASCAR car on ice for the first time, EuroNASCAR will make history again by organizing the first ever NASCAR competition on ice between late 2022 and early 2023. Date, venue and formula of the event will be unveiled in due time. 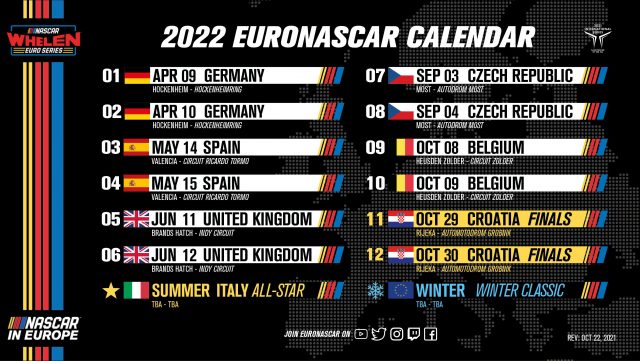 The Hockenheimring holds Grade 1 certification from the FIA

Motorsport festival to mark the 90th anniversary of the Hockenheimring