New for 2020 are double points playoffs extended to 6 rounds, a brand new American Festival in Rome, Italy and the Euro NASCAR Finals at Hockenheim, further enhancing the series’ status as one of the best championships in Europe.

“This is probably the best calendar in the series’ history,” declared NWES president CEO Jerome Galpin. “We are very proud and fortunate to work with such fantastic track partners. We all share the common goal to offer to European fans a unique at-track experience based on Pure Racing, full access to the competition and great American fun festivals!”

“Next year’s schedule is a testament to the strength and popularity of the NASCAR Whelen Euro Series,” said Gene Stefanyshyn, NASCAR Chief International Officer. “The series will bring exciting, side-by-side NASCAR racing to fans in seven countries across Europe. Our proximity to several big cities – including the new American Festival in Rome – will continue to make it easy for families to see our style of racing up close.”

The European NASCAR season will kick off on April 25-26 with the traditional opening rounds in Valencia, Spain. The Valencia NASCAR Fest at the Circuit Ricardo Tormo will celebrate its seventh edition. Six weeks later NWES series will head to Brands Hatch, UK for the hugely popular American SpeedFest. The historic 1,9-km Indy Circuit will host the British NASCAR GP for the eighth time on June 6-7.

After a splendid inaugural event in 2019, on June 21-22 Most and the Czech Republic will welcome Euro NASCAR again – fresh off a multi-year contract renewal – with the second edition of the Autodrom Most NASCAR Show. Raceway Venray will once again wrap-up the regular season on July 11-12 with a repeat of the successful formula featuring one 70-lap EuroNASCAR 2 (formerly ELITE 2) race on Saturday and on 100-lap EuroNASCAR PRO (formerly ELITE 1) race on Sunday at the fastest half-mile oval in Europe.

After the summer break, it will be playoff time again with six races awarding double points. On September 12-13 a brand new American Festival will make its debut in Rome, Italy at the 4-km Vallelunga road course. The Italian event will be followed three weeks later, on October 3-4 by the sixth edition of the NASCAR GP Belgium at the historic Circuit Zolder in the forest of the Limburg region.

The Hockenheimring, in Germany, will host the Euro NASCAR Finals for the first time on October 17-18. A guarantee for spectacular door-to-door racing, the iconic German track will crown the NASCAR Whelen Euro Series Champion in the fourth edition of the American Fan Fest.

Valencia, Most, Zolder and Hockenheim will host the four rounds making up the 2020 EuroNASCAR Club Challenge calendar. The regularity-based division of the NASCAR Whelen Euro Series will hit the track on Thursday at the four venues and contest its fourth season.

The 2020 NWES calendar will offer every race fan an opportunity to enjoy the unrivalled atmosphere of a NASCAR GP and grant drivers a wide variety of racing experiences. Only the best of the best will be the 2020 Euro NASCAR Champion. Save the dates race fans! 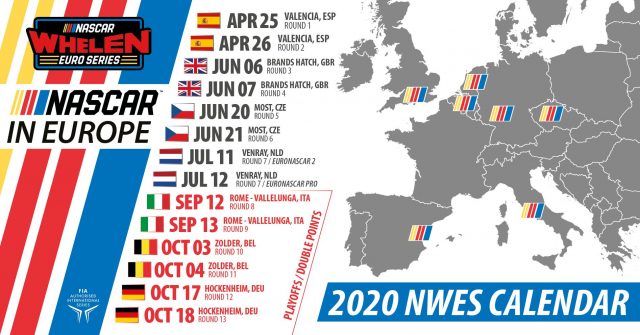